Operating a power-driven vessel is generally pretty easy.  Push the throttle forward, and you get propeller discharge current which either flows across the rudder or is directed flow in the case of outboards and I/Os.  The faster you go, the more control you typically have due to the increased flow over the hull and through the prop.

What many folks find challenging is keeping the boat in control with no way on.  Every operator should be able to hold their boat in a static position in virtually all conditions.  It’s easy to spot those who aren’t comfortable with it – they avoid the neutral gear position and are constantly circling to maintain control.

The primary factor to deal with is wind and how it affects your boat.  When left to drift with the wind, most boats will lay with the weather between the beam and the quarter.  There are a lot of variables at play, but most small boats have more windage forward, and they have running gear (propeller shaft, prop, and rudder, or lower unit for I/Os and outboards) at the very aft end. There is more drag in the water aft, so the bow blows downwind more easily than the stern.

For outdrive and outboard-powered boats, don’t fight the bow – leave the bow dead downwind when holding position.  This assumes moderate conditions where it is acceptable to expose the transom and cockpit to the weather.  With quick bumps into reverse and forward it is easy to keep the stern to the wind.  The same situation applies when leaving a dock with the wind setting onto it – it is always easier and safer to back off the dock (after using an after bow spring) rather than force the bow into the wind.

In heavier wind and seas, it is better to take the elements on the bow to avoid the possibility of taking water over the transom.  There will need to be more attention to the helm and gears to hold position.  Also, it is generally easier to keep inboard-powered boats in position with the bow upwind – especially single engine boats.

While easier with a twin, any single engine boat can be rotated a full 360 degrees within roughly its own length.  This maneuver is called back and fill, from the days of sail.  With an outboard or I/O, this requires steering from lock to lock on each side, while applying short bursts of power in forward and reverse.  On an inboard single engine vessel you need to know in which direction the propeller rotates.

Let’s assume a right hand propeller which rotates clockwise while turning ahead when viewed from astern.  Turning astern (in reverse), the stern will pull noticeably to port as soon as you shift into gear.  In forward gear, the stern will pull to starboard although not as noticeably as in reverse.  This is called propwalk.  So for a boat with a right hand prop, you MUST always rotate to starboard.  Leave the helm over to right full, and use alternating bursts of forward and reverse to spin the boat.  It is much more difficult if not impossible to try to back and fill against the effect of propwalk so you need to use it to your advantage.

Practice holding position and using back and fill until you are confident with keeping the boat in place with no way on in any conditions. 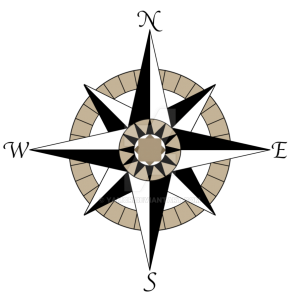